For sanitizing masks and clothing

For prevention of ticks

AAB668 surrounds the bacteria and kills them by driving them into an anoxic state.  And retains its antibacterial effect for a long time and prevents the development of other bacteria.

Currently, a medical institution in Japan is requesting an antibacterial and  that does not cause rough skin.

Please consider if it may become a necessary product.

There are many different antimicrobial agents in the world.

However, any method that prevents or kills viruses or fungi with powerful chemicals also affects the human body, and that is a last resort.

Viruses and fungi eventually acquire resistance and chemicals become ineffective. If viruses and fungi are not systematically killed, they will quickly become resistant to mutated bacteria.

You can expect about 5 minutes at most, but you can expect only a short time effect, and it will remove oil
from the skin and make the skin dry There are drawbacks.

We don't understand these things.

Hypochlorous acid water and sodium hypochlorite water have weak antibacterial effects and are not
recommended for the body. It can also be obtained by dissolving salt in water and electrolyzing salt solution.

This is true for water that is mixed with hydrogen water. Hydrogen is almost insoluble in water.

We don't understand why hydrogen water can be made.

AAB668 will maintain its antimicrobial effect for more than 1 day when used on masks unless rinsed with water.

Its effect lasts for more than one day. It also keeps skin moist without damaging it.

As the developer, I have been using AAB668 on my children since I was born.

● AAB surrounds bacteria and kills them by obliging to be placed in no-oxygen  condition.

● AAB holds its anti-bacteria effect for a long time and shuts down another bacteria from germination.

〈Surprising! 668 kinds of bacteria as below have been used for examining and confirming the real bactericidal and other effects of AAB〉

・Safe and reliable as there is no alcohol or hypochlorous acid

AAB is synthesized by 100% active medical agent. It can set low level of minimum inhibitory concentration(MIC) and reduce use of medical agent. For this reason AAB does not cause the physical change and color reduction change.

AAB does not degrade in heat, ultra violet, acid, alkali, organic solvent and does not elute in the air and in water. Its antibacterial effect last long term.

● 916 chemical substances designated in the PRTR

● Ministry of the Environment; 70 chemical substances having hormone activity (including 3 heavy metals)

● Ministry of the Environment; 70 chemical substances having hormone activity (including 3 heavy metals) AAB does not include them at all. 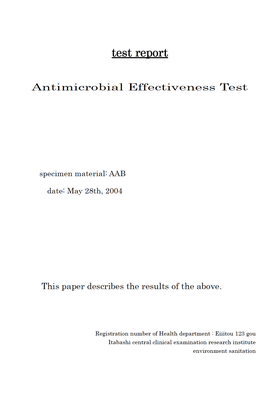 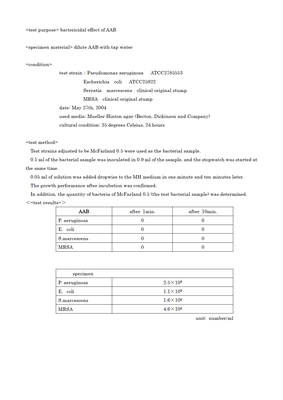 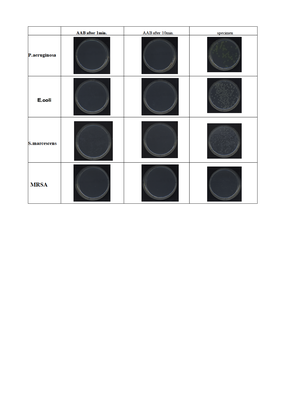 Antibacterial agent which is difficult to generate drug resistance bacterium

The main component of  AAB  is produced from medical agents which get the grant number for safety from official body of countries.

◆ AAB inhibits development of drug-resistant strain for long term because its main component is Diiodomethyl－P－tolylsulfone.

Recently, a movement has emerged among Muslim countries or believers to forbid not only drinking alcohol, but also anything that contains alcohol as an ingredient.

For example, there are those who believe that alcohol sanitizers are not acceptable. In restaurants, alcohol is used for disinfection. They say that this is wrong. This is the result of Halal certification, which, when taken to its logical conclusion, would exclude the use of alcohol of any kind.

In connection with the prohibition against using alcohol even for disinfection, the following story is told. It is not permissible to purify oneself with alcohol or any other alcoholic beverage. Al-Hasan and Abu'l-'Arya repel such things. Aṭṭā said that rubbing with sand is preferable to purification with alcohol or milk.

There is a fundamental question as to whether this can really be the basis and whether alcohol can be used for disinfection rather than the views of individual Islamic jurists. It is not a divine revelation, and it is not something that Muhammad said.

The question is whether it is effective.

It's time to wake up, folks.

If alcohol were really effective, the new coronavirus would not have spread so far around the world.

Alcohol has a momentary sterilizing effect, but in terms of antibacterial activity, it is only effective for about 5 minutes.

Alcohol has a distinctive pungent odor, which is a major factor in people's blind faith in its efficacy.

Another disadvantage is that alcohol removes oil from the skin, which can easily dry out the skin. This can be even worse for those who have allergic reactions.

Unfortunately, the risk of the new coronavirus will never be zero in the future, and it is possible that more virulent viruses such as bird flu will attack us humans.

AAB668 is a non-toxic, human and environmentally friendly product that pursues effective effects especially in the fields of hygiene and long-term care.

Examples of Secondary Effects and Indications of AAB668

◾ Case of a patient infected with fulminant hemolytic streptococci

This is the case of a man who is a farmer.

On an early July day, he was bitten and scratched by a mosquito in a field, from which fulminant hemolytic streptococci entered his body.

I was examined by a doctor who has seen hundreds of cases and is considered "the authority on fulminant streptococcal disease." He said, "This is a terrible symptom. He said, "Today is Friday, so please come back on Monday, and we will decide whether to amputate or not.

I went home in despair. Then I remembered AAB668.

However, when he examined the affected area, he said, "Oh, what did you do? It's getting better".

He then went on to say. ”Normally, even if the growth of the fungus is a little slow, it should not heal. There should be no cure for this infection, but what happened?".

Naturally, the test results were fine and my leg did not have to be amputated.

Then, after a week of wiping AAB 668, the surface of the skin began to crust and peel, and after about two weeks, the swelling went away. Believe it or not, this story is true.

And many have survived amputations, even though their diabetes worsened and their feet smelled putrid.